We recently watched ‘Travelling Blind’ on BBC iplayer and enjoyed it. Lots of poignant moments as Amar Latif travelled through Turkey with the comedian, Sarah Pascoe – Amar lost his sight 20 years ago, aged 18.  As positive a person as he was, he was honest about the fact that he has to keep positive and busy so as not to sink emotionally.  There were particularly moving moments as he shared how his memories of what his mum, for example, looked like have faded over the years.  He fears the loss of more ‘sight memory’ over the years. 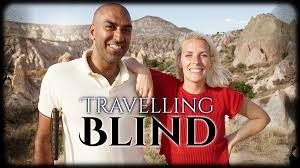 It reminded me of something I read a few years ago…

Here is John Piper in a post called ‘My Young Life Has Been Physically Ruined – Now What?’.  He’s responding to someone writing in about his brother Shaun who lost his sight through cancer.

One of the keys to finding strength to live with disability here — even the extraordinary disability of blindness — is to experience the grace of God in the unshakable confidence that this life, as precious as it is, is only prelude to the life which is life indeed. This life, in fact, in reality, not pretending, not romanticizing, not dreaming, but being utterly realistic, this life is very, very short. Paul says in 2 Corinthians 4:17: These afflictions are light and momentary. And by “momentary,” he meant a lifetime. Peter says: We may suffer various trials for a little while (1 Peter 1:6). And by “little while,” he meant a lifetime. James says: This life is like a vapor’s breath on a winter’s morning: two seconds, max (James 4:14). And that “vapor’s breath” is a lifetime.

And, of course, it is a miracle, a wonderful, God-given miracle to believe that and to live in the joyful confidence that, in a vapor’s breath, I will see again. In a vapor’s breath, I will walk again. And I pray for that miracle for Shaun’s brother. It is a precious thing, I know. It is a precious thing to be able to see the beauties of the world and the people of this world with the eyes that are in our head. But it is — and I pray that there will be grace for Shaun’s brother to believe this — it is an infinitely more precious thing to see with the eyes of the heart as Paul calls them in Ephesians 1:18. The greatest tragedy in the world is that people with good eyes cannot see.

Jesus lamented the blindness in Jerusalem. He said, “seeing they do not see” (Matthew 13:13). And I pray that Jesus would say just the opposite over Shaun’s brother. Blessed are your eyes, because not seeing, you see (Matthew 13:16).

So I am personally reminded in my paralysis that it’s more important to be able to walk with the Lord than to be able to walk physically; it will matter more in eternity that God enabled me to run the Christian race in this life (1 Corinthians 9:24) than that I was unable to run over a hill top or across a football pitch.

There’s a varied arsenal of Bible truths that I reach for on harder days.  Each one of them has their place in doing battle on despairing thoughts and on the suffering in the lives of those we know and love.

Today feels like one of those days.  Sad news from friends we love and their losses and, here, another UTI after the last one had just cleared up (and I’d been doing all the things I’m meant to do including drinking cranberry juice by the litre!).  Not a big thing in one sense, but in the category of ‘one thing too many’

The range of truths I reach for on these days includes: ‘God provides one day at a time’; ‘it’s okay to grieve’; ‘the Psalms encourage honesty with God’; ‘it’s okay to rest; you’re not indispensible’; ‘God took His own medicine and knows what suffering is like’; ‘God is present even when He seems most absent’

Sometimes the truth I reach for is ‘eternity puts suffering in perspective‘.

I think Yancey puts it well:

“Who would complain if God allowed one hour of suffering in an entire lifetime of comfort? …[our] lifetime is a mere hour of eternity.

In the Christian scheme of things, this world and the time spent here are not all there is…remember: less than one-millionth of the evidence has been presented, and that is being worked out under a rebel flag.  God is not deaf.  God is as grieved by the world’s trauma as you are.  His only son died here.  But God has promised to set things right.

Let history finish.  Let the orchestra scratch out its last mournful warm-up note of discord before it bursts into the symphony.

As Paul said, “In my opinion whatever we may have to go through now is less than nothing compared with the magnificent future God has planned for us.  The whole creation is on tiptoe to see the wonderful sight of the sons of God coming into their own…(Rom 8:18, Phillips Translation)

I find that line about one-millionth of the evidence striking. Our perspective on God is limited and based entirely on a tiny fraction of time lived in a fallen world.  Like a beached whale basing its understanding of its existence entirely on the dry shores on which it is trapped rather than on the freedom of the Pacific ocean to which it may still return.  We can’t imagine a sinless suffering-free world, but one day we’ll be able to judge things from there. Don’t mishear that: the Bible never diminishes our real suffering.  But God does want to give us reasons for hope.

That helps for today.